Usually, my blogs have a degree of humour associated with the story that I tell, but in light of the terrible events in Paris last week, there is a more sombre tone to what I want to say. However I hope, having read this piece, you will agree that the goodness of humanity, invariably overcomes the dreadful acts that have been witnessed of late, in one of the most beautiful cities in Europe.

I have to take you back just over 12 months, when the Mouth and Foot Painting Artists (MFPA) organised a publicity event which involved a number of the Artists being invited to paint their version of an iconic painting – exhibited at various museums or galleries throughout the UK.

I was honoured to be asked to paint at the National Museum of Wales, and worked closely with staff at the Museum in agreeing that I could paint a piece of French Impressionist work as my contribution to the MFPA event. We decided on Renoir’s La Parisienne (sometimes called the Blue Lady).

I have to say, the Museum staff were wonderful, and made all the arrangements necessary to allow me to paint in a Gallery full of French masterpieces – the value of which I dread to think.

I had an absolute blast on the day of the event – meeting many interesting characters, and not least a group of French exchange Students. Using their pigeon English and my pigeon French, we were able to strike a conversation that resulted in them voting my version of La Parisienne much better than the original!! Yes, young male French Students can still flatter an old flirt like me, with all the je ne sais quoi of the best of their country’s contemporaries.

At the end of the day, no damage was done to the Gallery, and everyone agreed that the event had been such a resounding success, we should repeat it again.

And so it was, that 12 months later, I was invited to return to the Impressionist Gallery … this time to paint Monet’s San Giorgio Maggiore by Twilight.

The challenge in this piece was to try and replicate Monet’s oil painting style with acrylic. Not an easy task, which involved some contortionist movements of the neck, but all in all, a worthwhile exercise, the outcome of which I was really pleased with.

As a result of this planned second visit to the Museum, I was also invited to return to give a talk in the Impressionist Gallery on “Life and Art with Four Fingers and Thirteen Toes”. 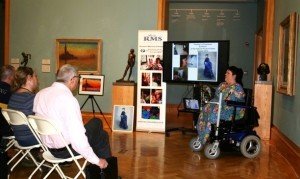 During the preliminary meetings I had with the Museum (the Staff work extremely hard to make the Museum an interesting and inviting venue to visit) it became clear that a clash of events would make for an interesting combination of Art and Music, on the day set for my talk.

Amongst their many groups of supporters, the Museum works closely with the Royal Welsh College of Music and Drama. The College are, periodically, invited to perform in the Museum – at various locations … the foyer, and in a number of Galleries, and to stage musical workshops for differing age groups. It was decided to combine my talk with the musical performances of the College’s third year students. To make the event a little more interesting, the students decided that they would tailor their performances to certain aspects of my story. Originally the idea was to “book-end” my talk with a few pieces that would fit with the tenor of what I had to say.

The agreed date was Friday the 13th November. I arrived at the Museum armed with my PowerPoint presentation, and my versions of the Impressionist Masterpieces, ever mindful that my humble efforts would stand side by side with these priceless works of art. Of course, the major difference being that my paintings were price-less!

But a surprise was waiting for me. Not only had the students been “stalking” me via the internet, they had spent an inordinate amount of time deciding on a programme of classical and contemporary music which they had formed into an hour-long concert. The concert was entitled “Reflections on Rosie”. The pieces chosen had taken portions of my story … starting with Schindler’s List (composed by John Williams – to reflect the Nazi element of the Thalidomide story) with the finale being Concertino – by Cécile Chaminade (a strong-willed French female composer). In between, the music took inspiration, not only from my book, but from my Blogs, which (as hopefully you know) continues to update readers on life and activities in the busy Moriarty-Simmonds household.

I will list the full programme at the end of this Blog, but it is also important to note that the composers chosen, had an unashamed French bias – to reflect the French Impressionist art I had chosen to paint. The concert would be staged in the shadow of work by modernist artists who used bright vivid colours – techniques that I revel in using.

I cannot begin to tell you how humbled I was when the concert started. These students, in age no more than six months older than James, had taken a subject that they probably knew little or nothing about; Worked their musical talent into classical and contemporary pieces that, in the most beautiful way, told my story in a completely different and unique fashion.

I mostly cried my way through the renditions, and could not have been more proud to have a concert performed in my honour. I often wish my Mum was still with me, and able to see what I have achieved, and no more so than during that afternoon.

I have not enjoyed an afternoon so much for a long time. As we were travelling home, Steve described the afternoon as “enchanting” and it was exactly that. Later that evening, Steve trawled through his old music books, and found the lyrics to “Some Enchanted Evening” by Rodgers and Hammerstein from the musical South Pacific. In its first verse, reference is made to seeing a Stranger, and goes on to say … “somehow you know, you will see [them] again …” I met some fine young people that enchanted afternoon, and I genuinely hope I will meet them again. Somehow, I think I will, and in the not too distant future. When they are famous and well-established musicians, I will delight in saying that Charlie Brookes, Catrin Raymond, Andrew Wallace, Sarah Knight, Sarah Smith, Megan Davies, Amber Reeve, Sioned Evans, Grace Wyatt, Christina Negoescu, Eleanor Phillips, Annie Pullar, and Susanna Bailey performed just for me in the National Museum of Wales. I must also thank and acknowledge the talent of Zoe Smith (Head of Interdisciplinary Practice (Music) at the Royal Welsh College of Music & Drama) who over-saw the afternoon’s performance. 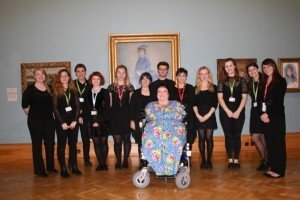 Of course it would be amiss of me not to acknowledge and thank my friends at the National Museum of Wales, who, over the last 18 months have allowed me (the only person ever to paint in the Gallery) to indulge my passion for art in a very special way.

However, I cannot close this Blog without returning to Paris, a city of culture and love, and from where, in 1874, Renoir and Monet made a defiant stand against the old-school Paris Salon Exhibitions. Paris holds many special memories for me. Steve and I honeymooned there over 27 years ago, and I have returned to the city on a number of occasions since. I have been privileged to have walk through areas of the city to which tourist flock, and to areas which are not so well-known on the tourist trail. As a city of passion it is second to none. The rich Parisian cultural heritage can never be denied, and those who seek to break that resilience have no respect for a heritage and culture that is based on love, talent and pride.

My Enchanted afternoon echoed with the magic of Paris, and in remembering that wonderful concert, I genuinely hope that, in the face of adversity and with a defiant stand, joie de vivre and laughter will soon return to the city of love …
… La Ville de l’amour.