And so here we are … a matter of hours from another New Year. Milestone events in 2015 seem to have come and gone, and of course, events on the global stage are never far from our thoughts. In looking forward to the New Year, it is important to remember everyone who has loved and lost, but in-so-doing, to cherish the memories of happy times. Only by emphasising those happy moments will sadness give way to happiness in the best of human traditions.

2015 has been a truly memorable year for me, and it started this time last year. I can’t believe 12 months has flown since I officially became an OBE. It was great fun, last night, tuning into the TV news channels, to see who had been recognised, and knowing just how they felt … celebrity or mere mortal … the sense of excitement and pride is experienced in equal measures. I was especially pleased to hear that my fellow Patron of Flamingo Chicks Tamara Rojo and friend Simon Weston had been awarded CBE’s. To them, and everyone else who has been recognised for excellence in their chosen fields, I wish them the best of good luck as they celebrate their award.

It has been a full on year in every aspect. On the work front, I am coming towards the end of my three year scholarship with the Mouth and Foot Painting Artists – I genuinely hope this will be extended, as I have thoroughly enjoyed developing my painting skills. I have taken part in numerous painting exhibitions and demonstrations, including an opportunity to paint live for a second year running at the National Museum Wales. I have given a great number of inspirational talks to various groups and organisations and a fair bit of media work. Looking at next years diary, there seems little opportunity to slow down!

Hats and outfits played a large part of the beginning of 2015, and so it was good to spend a few days in glorious Devon in June before my trip to Windsor Castle in July. Although not wonderfully accessible, Salcombe is a delightful seaside town, and the Salcombe Harbour Hotel with its cosy and accessible rooms, and fabulous food was just the right way to start the summer. The cast of The Only Way is Essex made an appearance at the hotel … Pity it wasn’t Made in Chelsea, but you can’t have everything! However, we did manage to spot The Pride of Cardiff paddle steamer moored in Dartmouth. 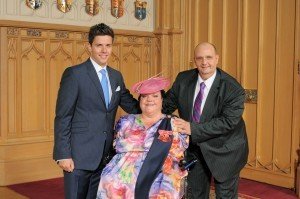 Our trip to Windsor was all I could have wished for, and more. The icing on the cake was to receive my OBE from the Queen. When I see her on TV, I still can’t believe that I have met Her Majesty. I have always had a great admiration of her dedication to duty, but now even more so – Especially having seen the BBC’s Cue the Queen – celebrating the Christmas Speech, and ITV’s Cameraman to the Queen. If you have not seen either, try to watch them on Catch Up – they are a fascinating insight into the life of our much loved Monarch.

After a trip to Jersey, where Steve was able to indulge his passion for classic cars – and in the process we learned a lot more than we have previously known about the Island’s history, we embarked on our Autumn work schedule, which was busy and fulfilling.

At the end of September, we were treated to a dinner hosted by our Friends at Porthcawl Lions Club to mark my OBE investiture. The Lions have always been known for finding unusual ways of creating entertainment, and on this occasion it was no exception. Enter the Porthcawl Ukulele Band, which had us all rocking in our seats!

I also was delighted to have been asked to be a Patron of Flamingo Chicks, and to help them establish ongoing links with Ty Gwyn School in Cardiff (where I have been a Governor for more years than I care to remember), in order to bring their unique style of ballet to the youngsters at the school, who are on the upper spectrum of learning difficulty. Alongside Flamingo Chicks, I joined the National Theatre of Wales as a Trustee, and have enjoyed a number of their productions – most recently CandyLion, from which I still have Positive Vibes!

November saw us visiting 10 Downing Street, for a reception hosted by Samantha Cameron to support the work of Flamingo Chicks. Unfortunately, we had to bypass the imposing staircase in favour of a rather compact (and that was indeed the case) lift. Sometimes not having any legs is an advantage! It was also necessary to use a platform lift to access the official reception rooms. All was fine going but Steve managed work his magic on the outward journey, and the lift broke down. I think it was just a rouse so he could spend more time in the corridors of power … When he was younger, he did have aspirations of being Prime Minister. However, our brief, but very enjoyable foray to that prestigious address is, I think, about as far as he’s going to go as a politician.

Then before we knew it, it was time to get ready for Christmas. Our annual Christmas Eve lunch for upwards of 17 waifs and strays (from both sides of the family) is now the stuff of legend. It has always been good fun, but has, of late, turned into a ‘themed’ extravaganza. It all started when we were unable to get to New York for Christmas about five years ago. The following year, we decided to stage an American themed Christmas party, and it’s got more ridiculous each year. This year, Steve decided we should mark the demise of Downton Abbey with a “Downton” theme … including Candelabras, Top Hats, Tiaras and Pearls. Needless to say, he deemed himself as Lord Grantham, I was designated as Lady Cora, and Steve’s Aunty Bron was christened the Dowager Countess. That was very fitting as she will celebrate her 90th birthday in a couple of weeks, being born in 1926 – which was the year in “Downton land” for the Christmas episode. The lunch culminated, just after dessert, when James and his little cousin Luke appeared with a “royal” cushion on top of which was a crown … Steve had decided that we should end the year roughly where we started, on a royal theme, and so I was elevated to the status of Queen. I must confess I quite liked being crowned Queen Rosaleen, if only for one day! 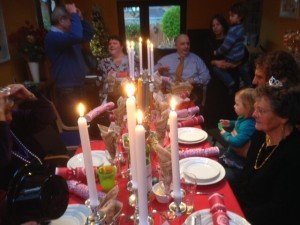 So, there you have it … 2015 in the Moriarty-Simmonds household in nine paragraphs … and what a year it has been!

We shall see out the old year quietly at home, and welcome 2016 with renewed optimism. Hoping that everything good about humanity will prevail over the atrocities (natural and man-made) that we have witnessed in 2015. We especially hope that James (and all of his/and our friends) who graduate next summer, will achieve each and every long-held ambition, but moreover that good health and success will follow them all in abundant measures.