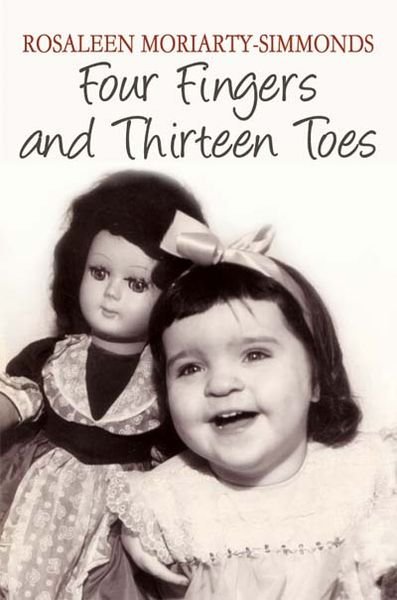 Four  Fingers and Thirteen Toes by Rosaleen Moriarty-Simmonds was originally published in July 2007. It was re-published by AuthorHouse in February 2009.

Four years down the line and it is still a best seller. It is the only book to have been exclusively written by a Thalidomide Impaired person that tells not only her life story, but is also interspersed with a definitive factual history of the drug Thalidomide.

There have been numerous reviews written about this book, but here is the latest, written by a fellow Thalidomide Impaired Person:-

“With the thalidomide generation having just reached its half century, there is no shortage of books telling the compelling life stories of some of the survivors. Rosie’s book – Four Fingers and Thirteen Toes – stands head and shoulders above many others.

Even with my insider knowledge of the world of thalidomide (I was born with those impairments too), Four Fingers and Thirteen Toes was a revelation. Rosie brings her iron will, her intellectual rigour but most of all her good humour to the thalidomide story.

The book weaves together the history of the drug – its roots in Germany’s Nazi past, its distribution to hundreds of thousands of unsuspecting pregnant women, and later its relicensing – with Rosie’s own story.

Just under ten years ago I wrote an article for the Daily Telegraph to accompany an hour-long radio documentary for the BBC. I quite consciously highlighted Rosie’s story at the very beginning because her parents – young as they were – had the moral backbone to know that the doctors’ advice to leave Rosie in care and go home and have another child was just plain wrong. Throughout this book, the love and care of Rosie’s parents and extended family give her the strength to wrestle with life’s challenges and to emerge victorious.

My one, abiding memory of this book? The drunk who emerges from a Cardiff pub, sees Rosie’s Mini Clubman with its extended roof and pokes his head into the car to order a hotdog with extra onions.”   Geoff Adams-Spink, Age & Disability Correspondent, BBC [10th November 2011]
Four  Fingers and Thirteen Toes by Rosaleen Moriarty-Simmonds is available directly from RMS – https://www.rms-consultancy.co.uk/Four-Fingers-and-Thirteen-Toes

Orders placed directly with RMS are charged at £10.00 per book (inclusive of postage & packaging)

It is also available from the publishers AuthorHouse:- http://bookstore.authorhouse.com

And can be ordered through all good bookstores and major online book retailers.