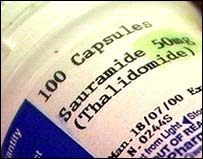 Thalidomide, the cause of the biggest medical scandal of the last century, is today recommended for use across the NHS.

It is the final rehabilitation for a drug that once struck terror into patients when it was prescribed to pregnant women as a treatment for morning sickness [RMS comment: and a multitude of other ailments and medical conditions] in the late 1950s and early 1960s. It turned out to cause birth defects in the foetus and about 10,000 babies were born around the world with stunted arms or legs or, in some cases, no limbs at all.

Thalidomide was withdrawn [RMS comment: its license was withdrawn] from sale in 1961 and the scandal led to a review of the marketing, testing and regulating of drugs, culminating in the Medicines Act, 1968.

Now, 50 years later, the National Institute for Clinical Excellence has recommended thalidomide for multiple myeloma, a cancer of the bone marrow. The decision marks a watershed in the drug’s slow return to respectability [RMS comment: I would not agree that it has respectability!]. For years it was shunned, but in the 1990s it was shown to be effective in the treatment of leprosy [RMS comment: when will journalists learn to research properly and state the facts?  Thalidomide was not an effective treatment of leprosy.  It was simply prescribed to enable patients to have a decent night’s sleep]. Further research suggested the mechanism by which it caused birth deformities, through limiting the blood supply to the foetus’s limbs, might be harnessed as a treatment for cancer, by inhibiting the growth of blood vessels that feed tumours.

In Britain, thalidomide has been used to treat brain cancer, kidney cancer and Kaposi’s sarcoma, a cancer involving the blood vessels of the skin.

Its most potent effects were shown against multiple myeloma, an incurable disease where the aim of treatment is to alleviate symptoms and minimise side effects. Its precise mechanism of action is unknown but it is thought to inhibit the growth and survival of myeloma cells and has an anti-inflammatory action.

The drug costs £2,100 per treatment cycle and is estimated to be suitable for 2,000 patients with multiple myeloma a year.

Thalidomide is prescribed in Brazil, where there are a large number of leprosy patients, but children are still being born today in South America with limb defects because of ignorance of its effects in pregnancy

Article Ends
RMS comment: this will now be a green light for the increased use of Thalidomide that I had both feared and predicted in my autobiography ‘Four Fingers and Thirteen Toes’ (2007, republished 2009) and the two part radio series I presented, on the impact of ‘Thalidomide – 50 Years on’ for BBC Radio Wales (2008).

Below you will find some extracts from ‘Four Fingers and Thirteen Toes’ to that effect:-

“So, as I both feared and predicted, Thalidomide will be used for more and more conditions. Of course, as the additional use increases, the risk of more children born disabled because of the drug will also be greater.

A small crumb of comfort in this continued global onslaught, is that Celgene have acknowledged that they, “Will do the right thing” in the event of the unthinkable occurring with the birth of a Thalidomide impaired baby as a result of a patient taking one of their Thalidomide manufactured drugs.

However, the need for ongoing use of a Risk Management Programme – together with stringent, uniform and worldwide guidelines for patients using Thalidomide – continues to weigh heavily on my mind. To this end I, and no doubt other interested parties, will continue to monitor the situation.

In my opinion whatever the outcome of European and worldwide usage, it cannot be over emphasised that any potential benefit of using Thalidomide must be balanced with its known toxicity. Experience has shown that it is virtually impossible to develop and implement a foolproof surveillance mechanism to deal with the incorrect use of Thalidomide.

Manufacturers, suppliers and physicians would do well to ponder the legal and moral implications of the greater use of the drug [Thalidomide].”